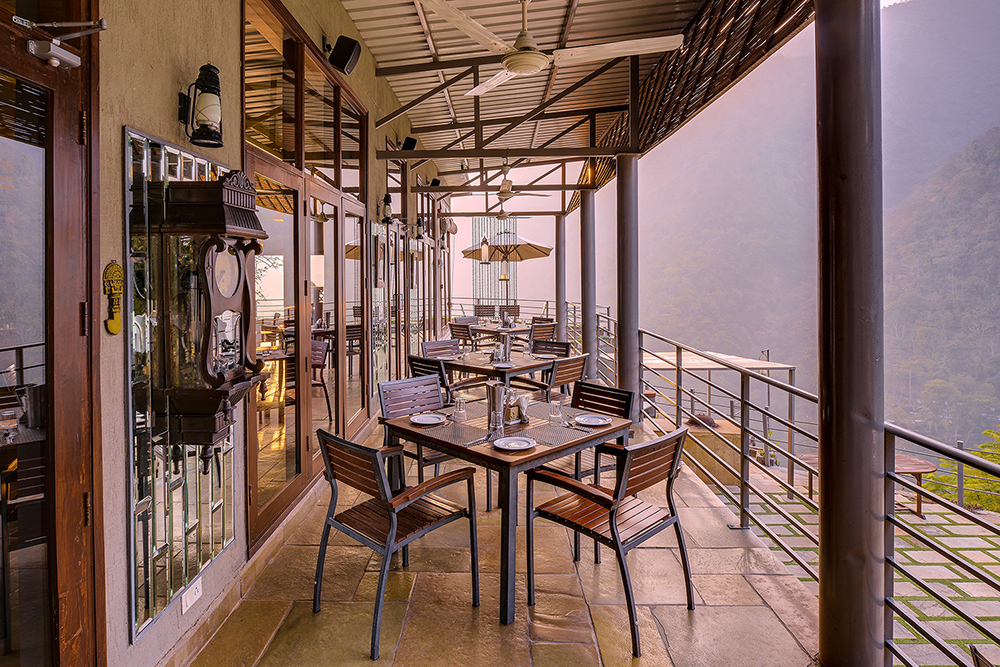 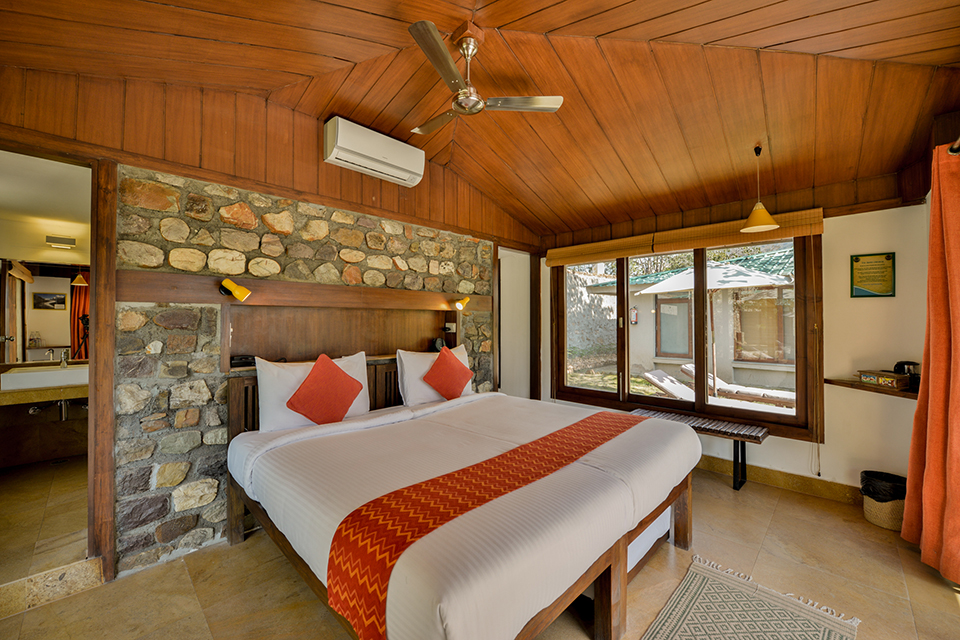 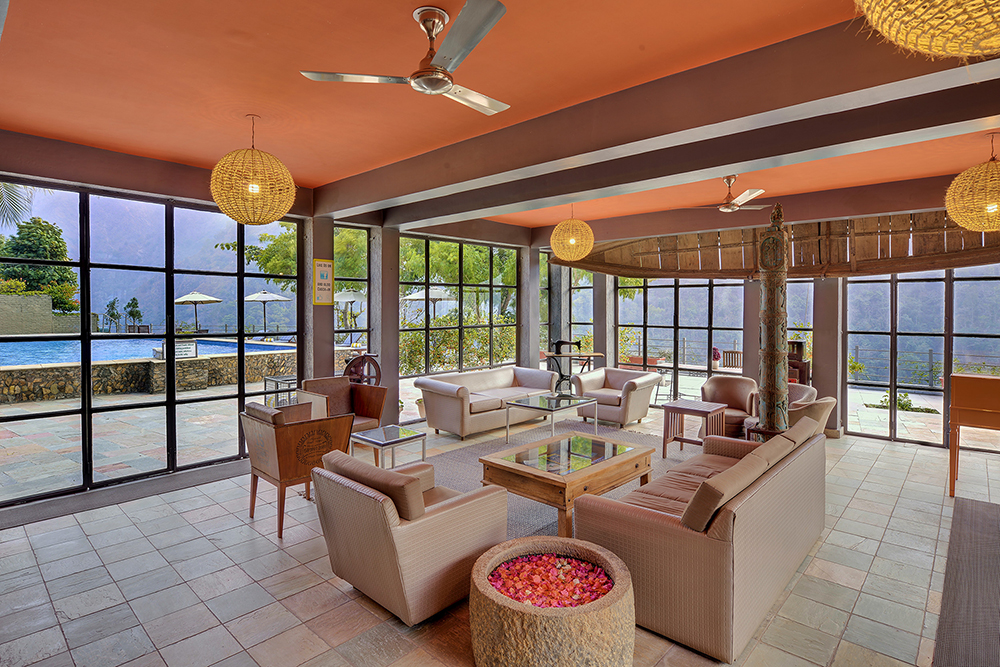 Distinguished by its use of stone, reed and steel wire, the project abandons a commonplace aesthetic and other such iconographic elements to distinguish itself in favour of a building that draws its aesthetic from the means, methods and modes of its construction. The resort consists of a stone building that houses a storage facility on the lower level and a dormitory on the upper level, a vernadah with a tensile roof that frames the surrounding mountains, a café and cottages for guests. The project is located on the banks of the river Ganga near Rishikesh, India.

Galvanized gabion boxes that have historically been used to secure river banks from erosion have been filled with stone and set within a concrete frame structure to form the walls of the storage facility. Adjacent gabions have been tied together by steel wire. The micro climate created by the river rusts the wire giving it a red patina which accentuates the verticality of the building. Through the onset of the patina, the building documents the passage of time and seasons. Materially, the relative permanence of the concrete and stone contrast sharply with the temporality of the reed trellis and the metal wire.

The cottages that dot the upper levels are characterized by their spartan luxuriousness. Entered through a private verandah, a central stone wall demarcates the tripartite bathroom from the bedroom. Extensively glazed, they open themselves up to the surrounding landscape. Their location, on the hill was determined by topography, views and distance from other such units. The metal structure of the cottages were fabricated off site. The cottages are accessed through a series of ramps and steps cut into the landscape. Trees and plants native to the area were planted to both secure the hill side and to promote the biodiversity of the region.

Connecting the storage facility to the verandah is a two level reed trellis with an elliptical staircase puncturing it. The stair supported by a pair of stringer beams and terminates in a small deck that faces the river and hills beyond. The absence of a central structural member gives the stair a sense of lightness contrasts sharply with both the texture and the “weightiness” of the adjoining buildings gabions. Stone, steel and shadow are the primary building materials that situate the project within the social, historical and religious continuum of the river Ganga. Using the valleys weather system as the context within which the project is located, the buildings share an umbilical relationship with their location. 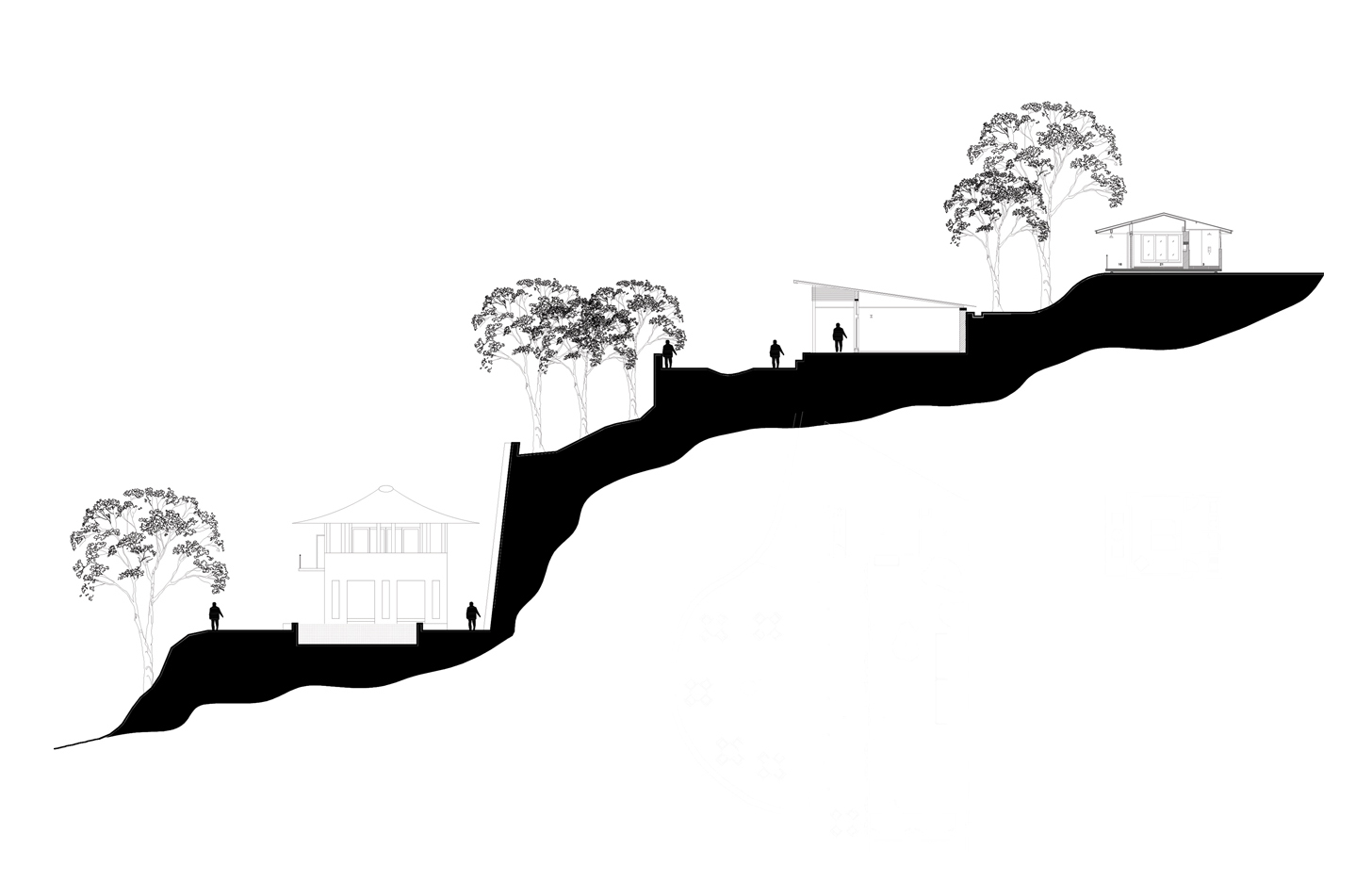