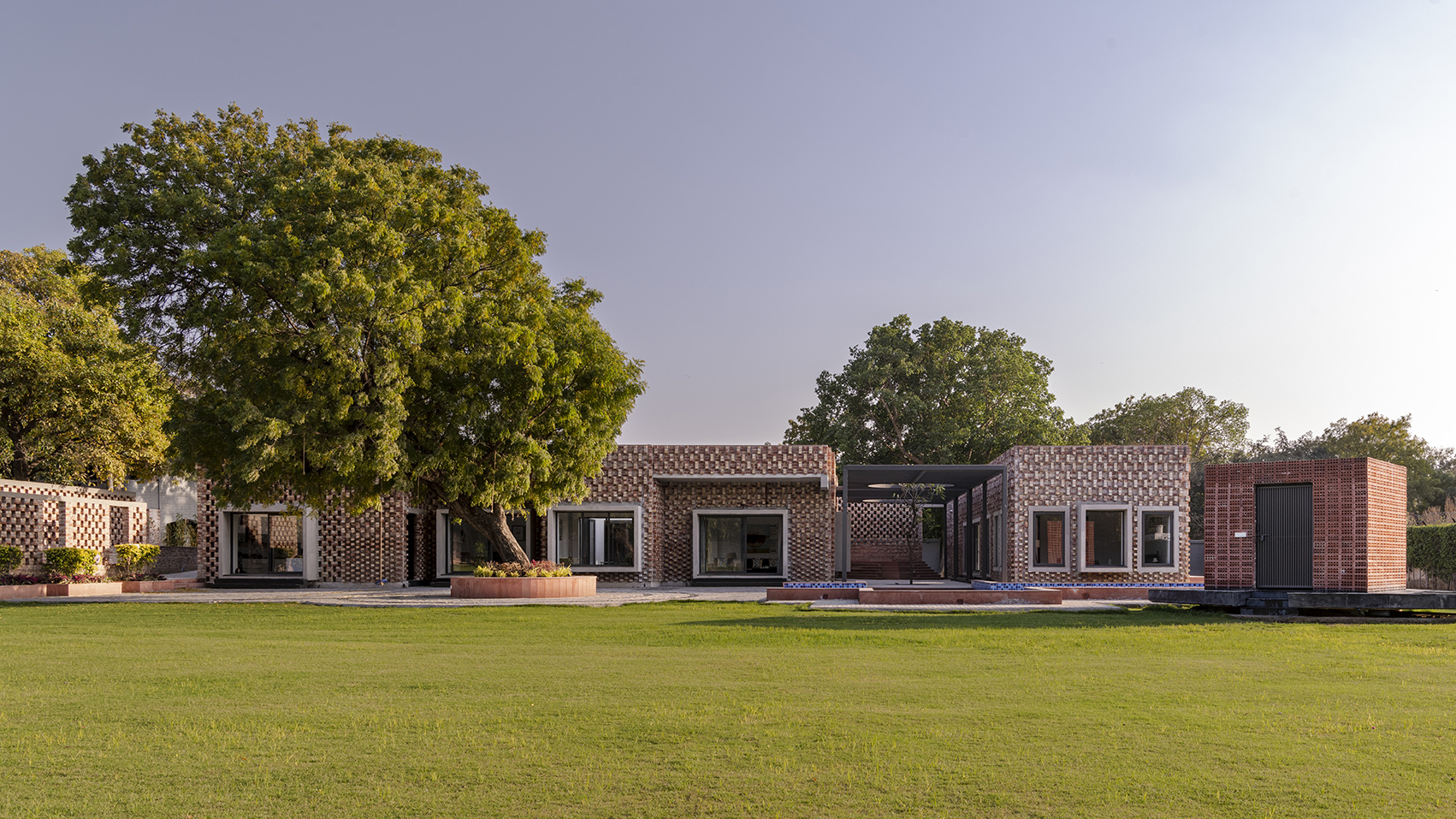 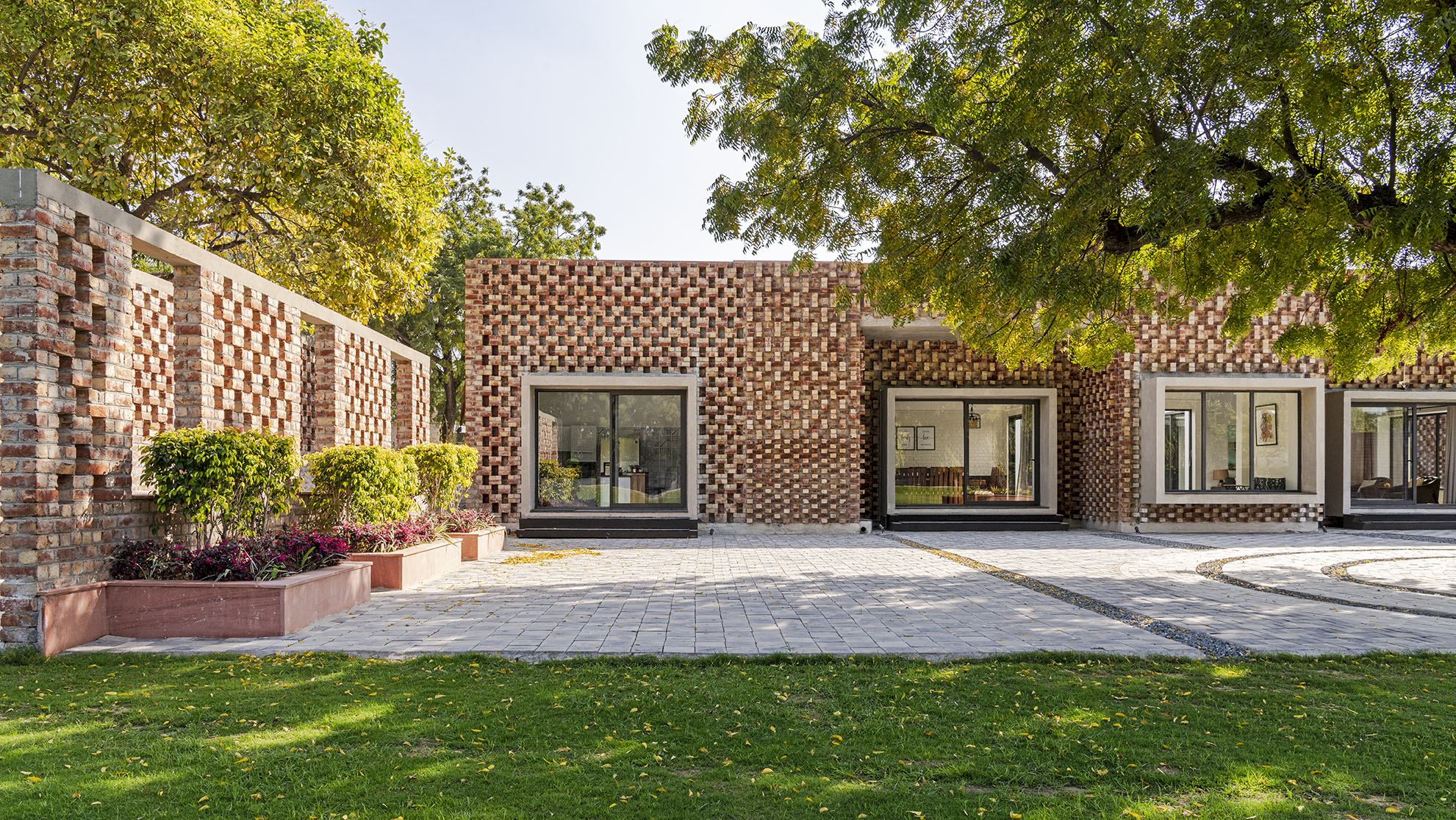 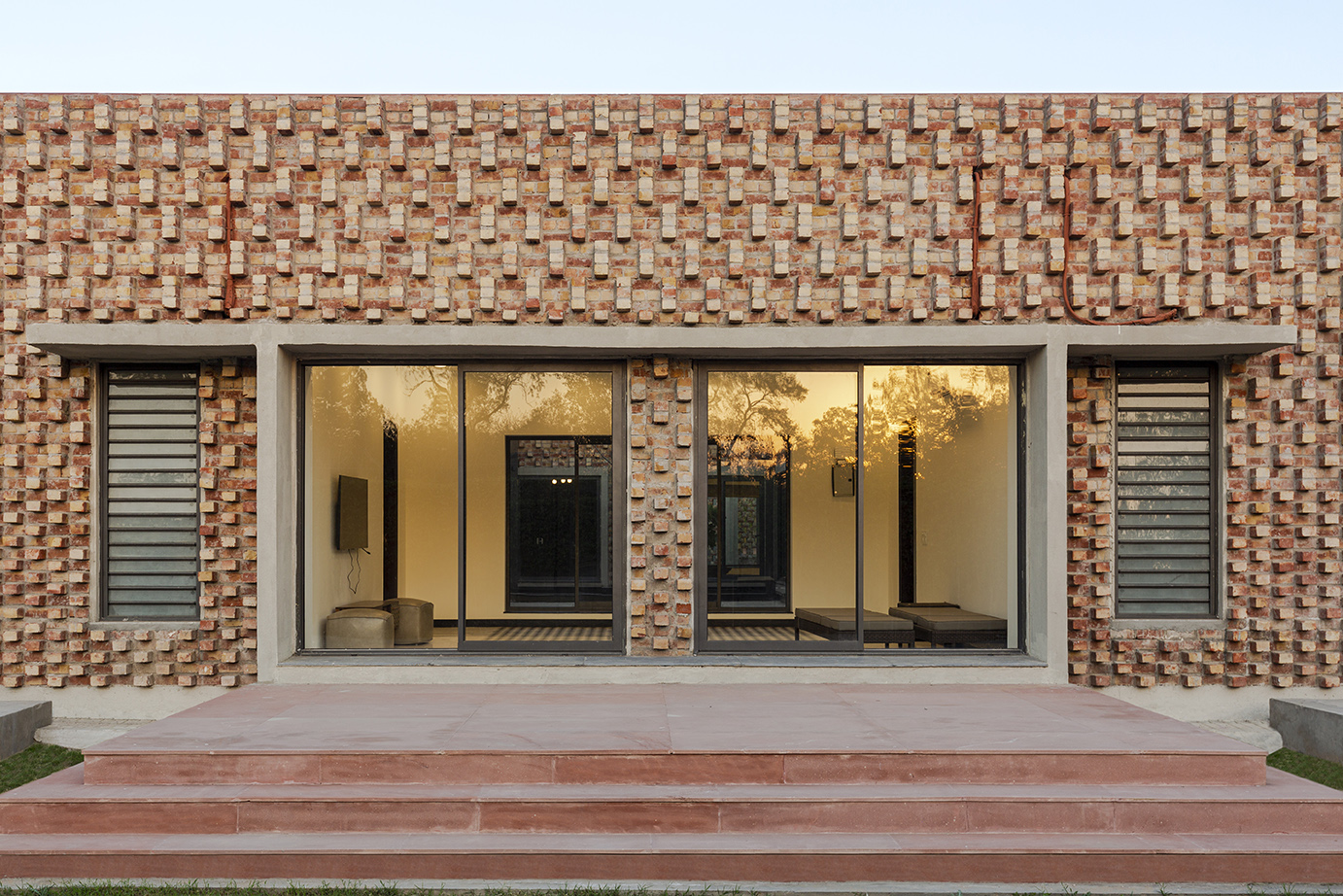 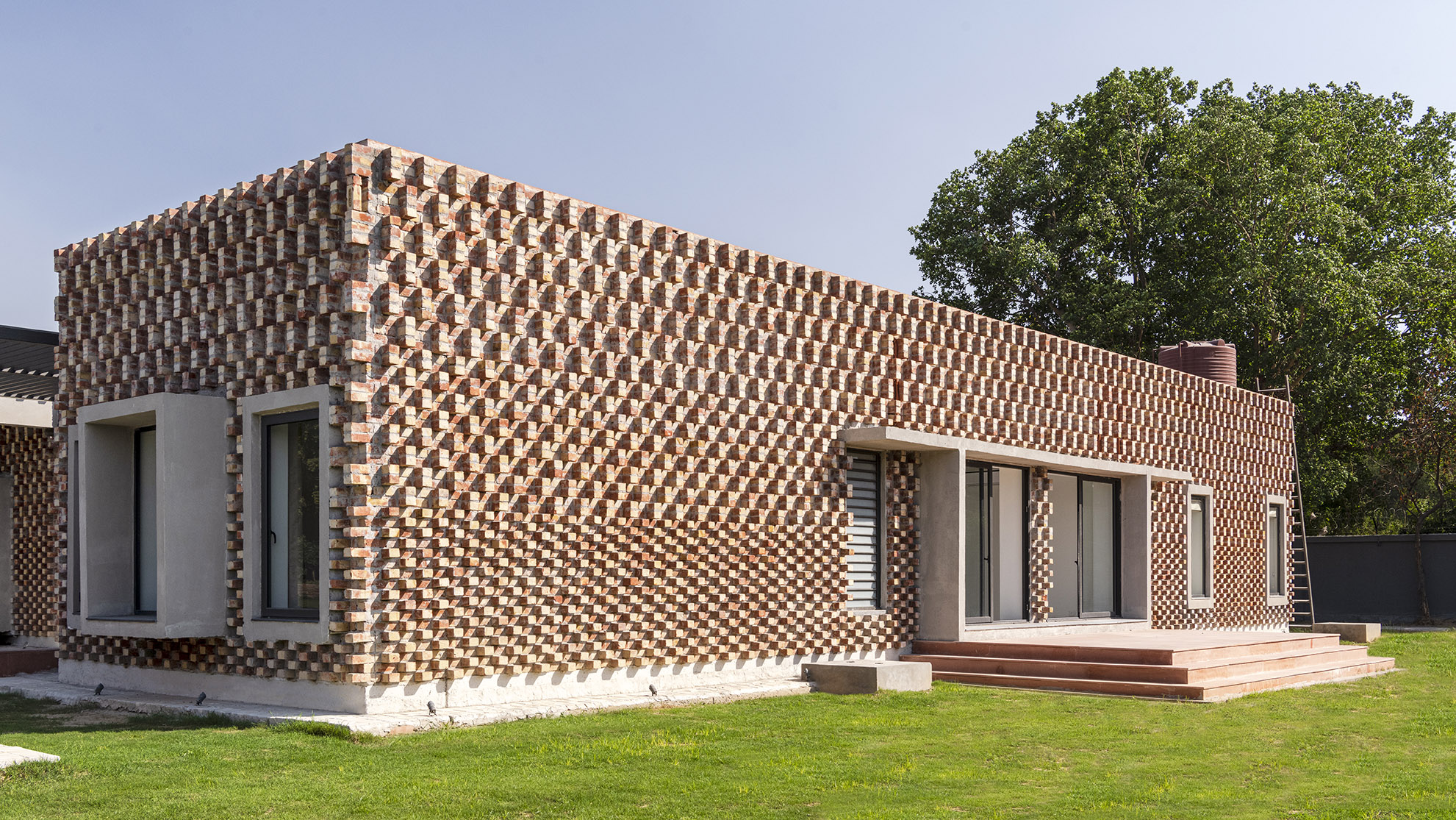 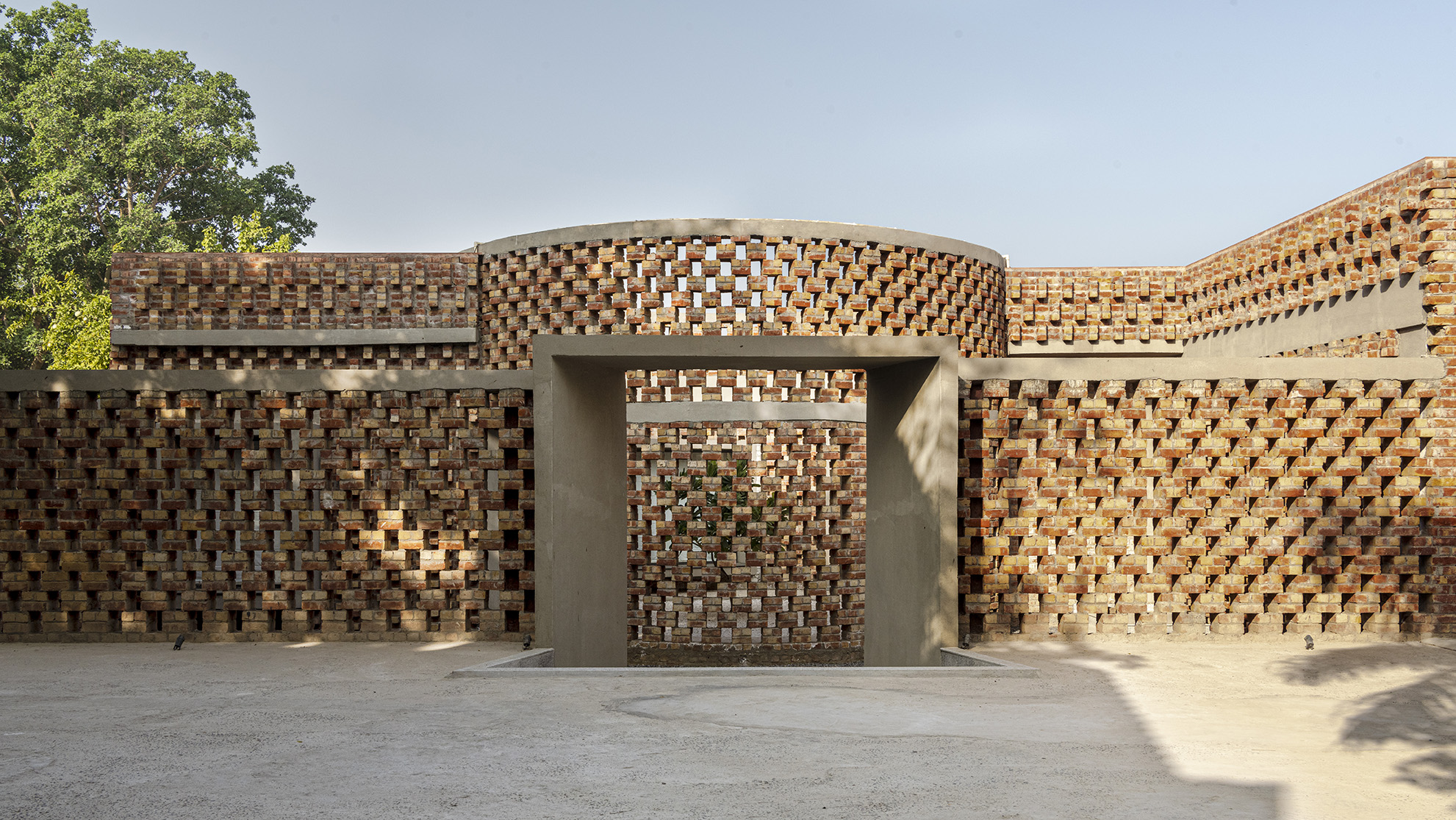 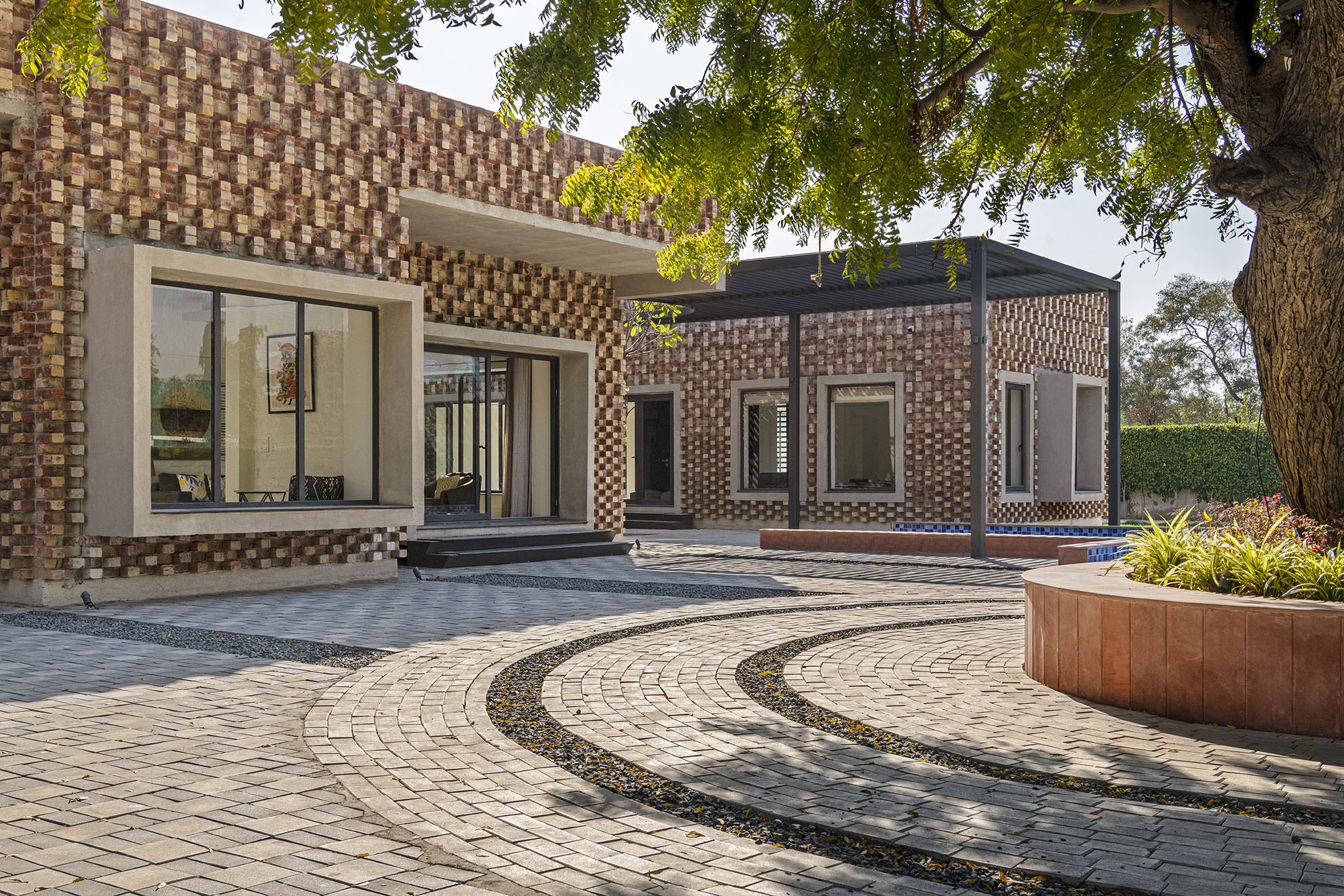 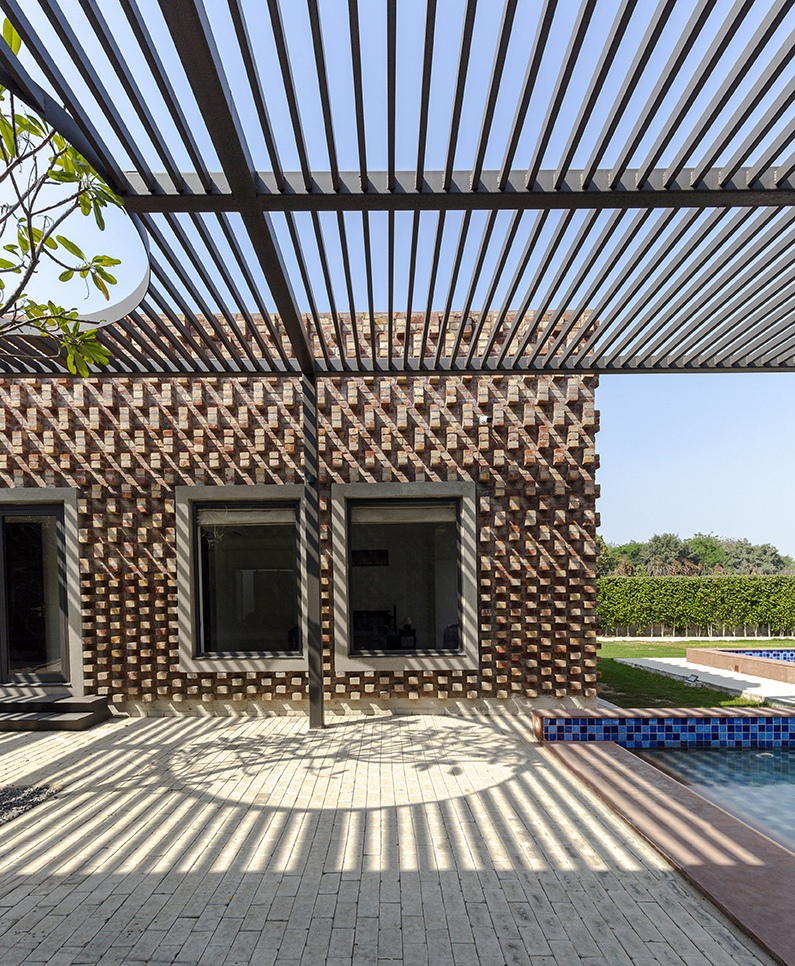 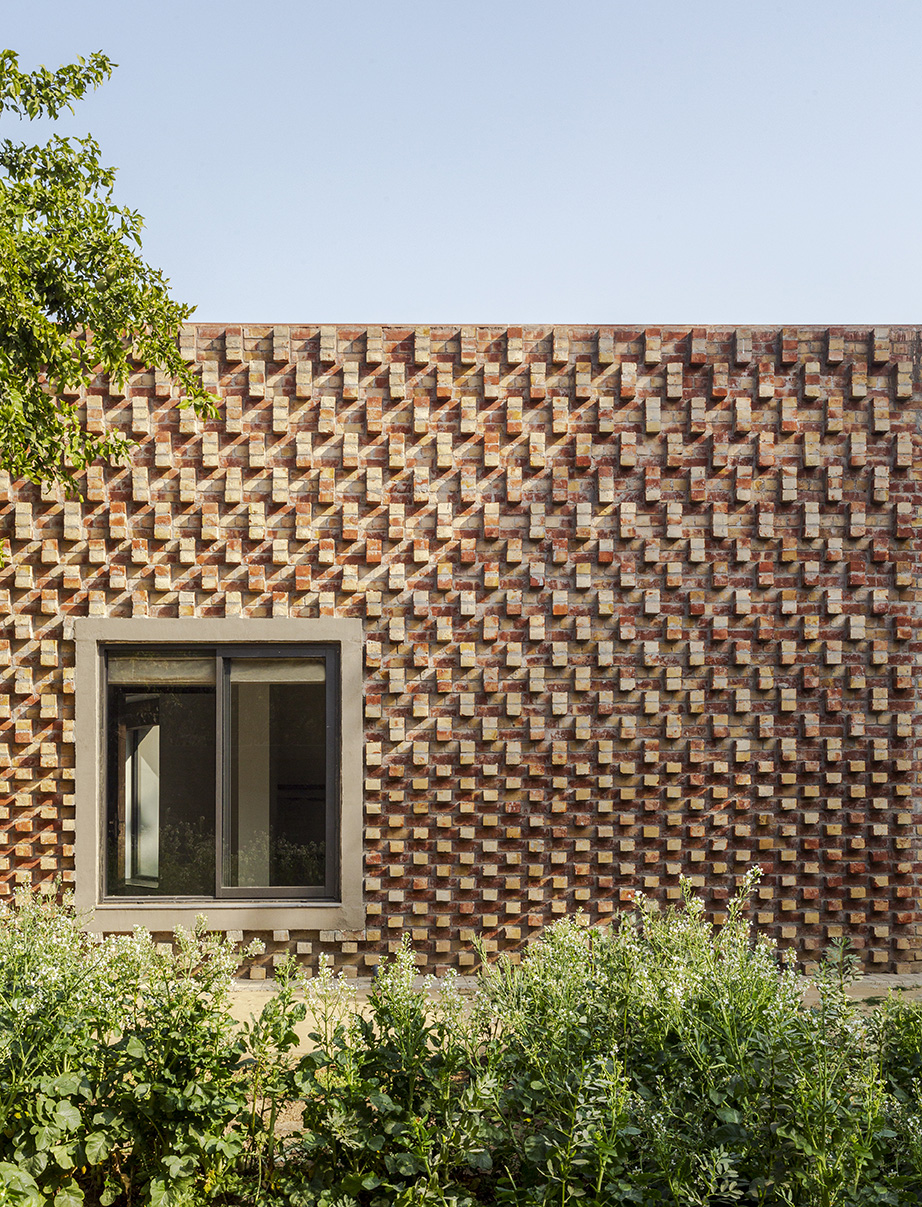 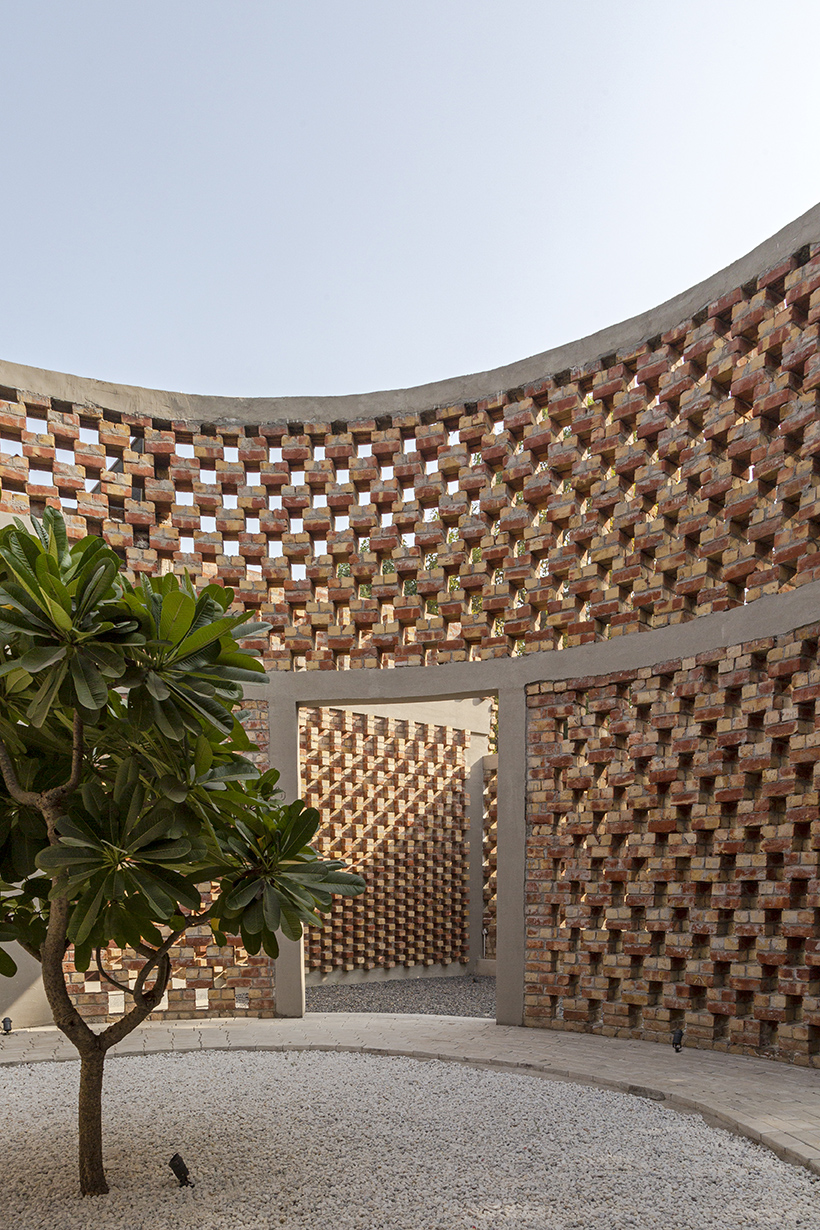 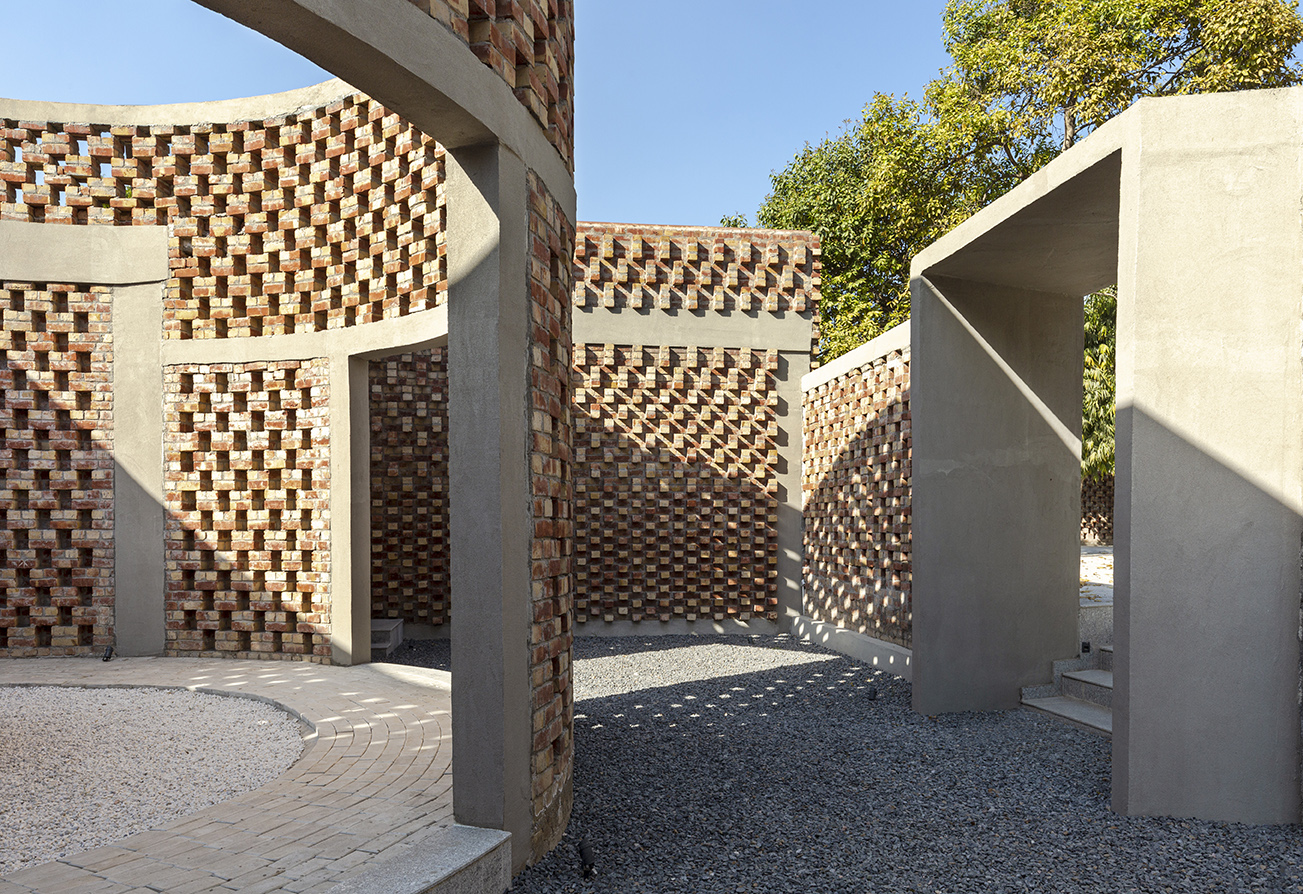 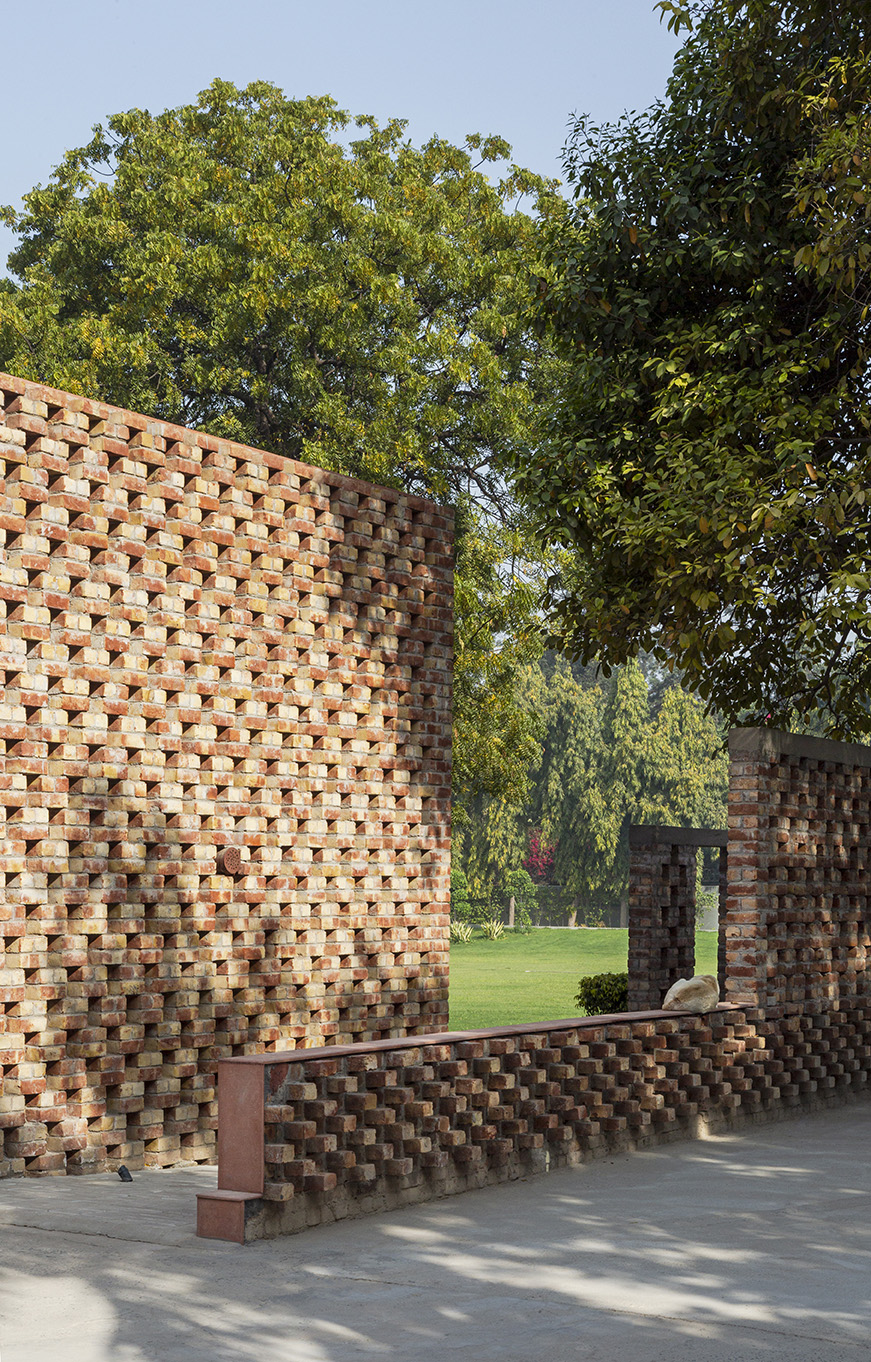 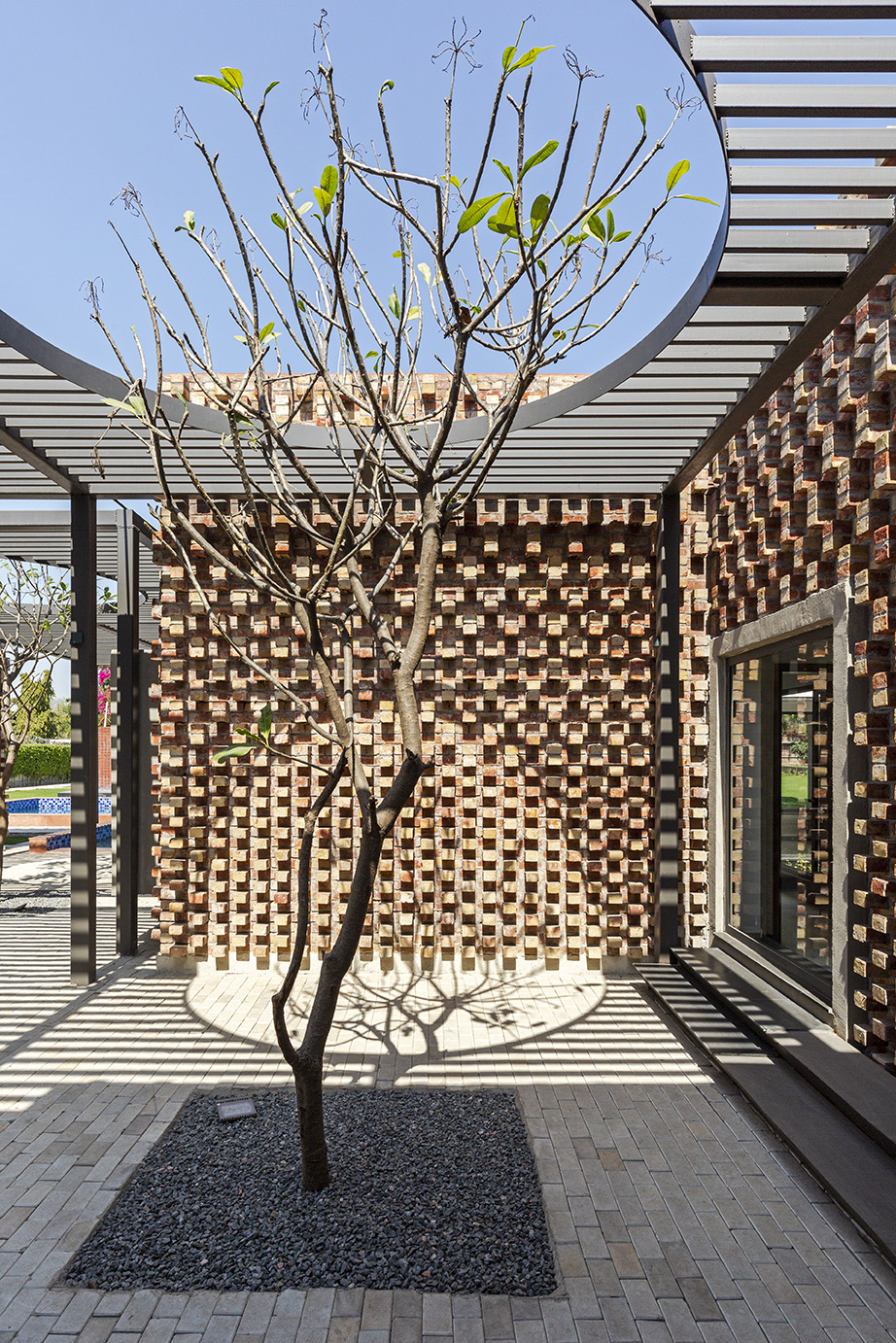 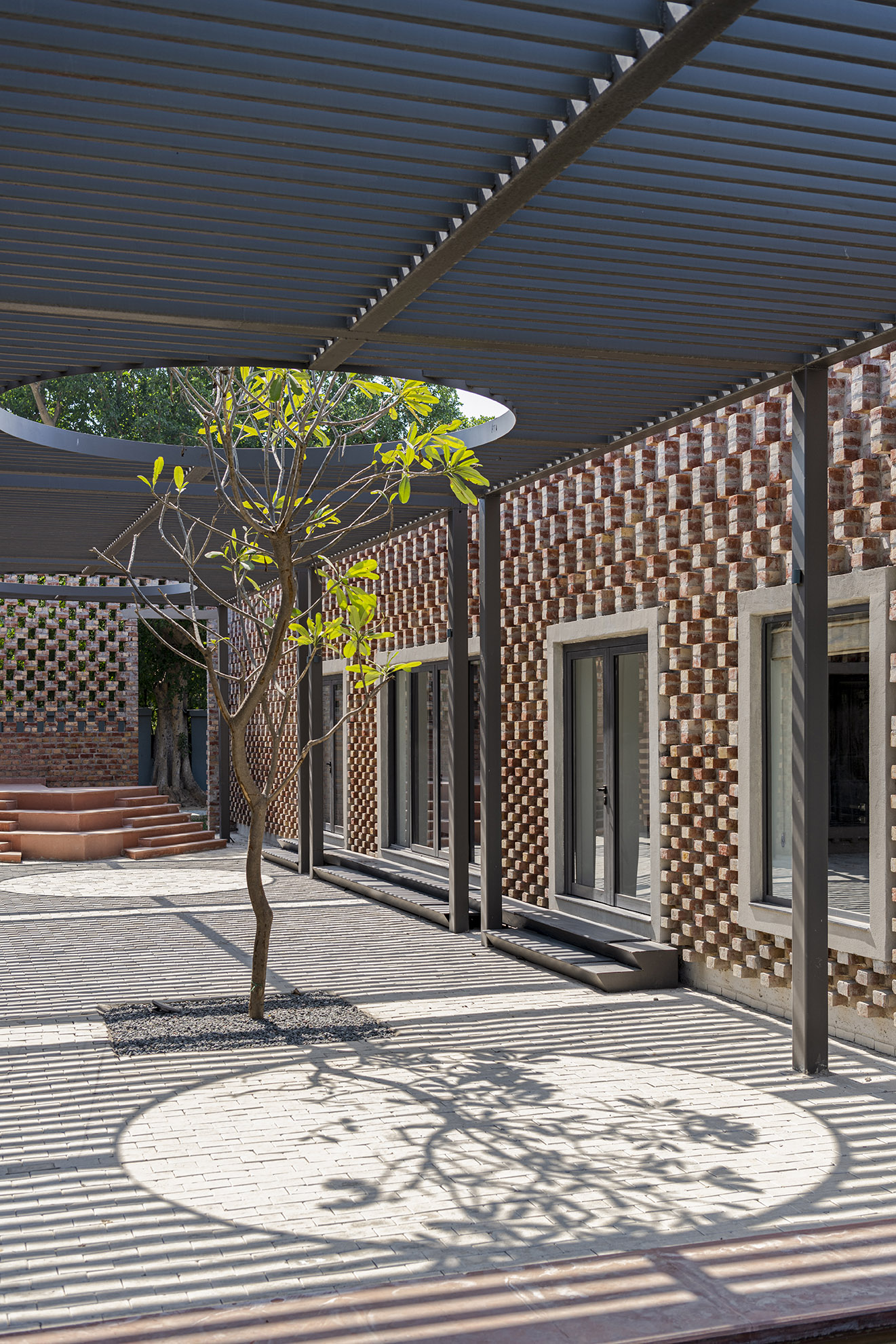 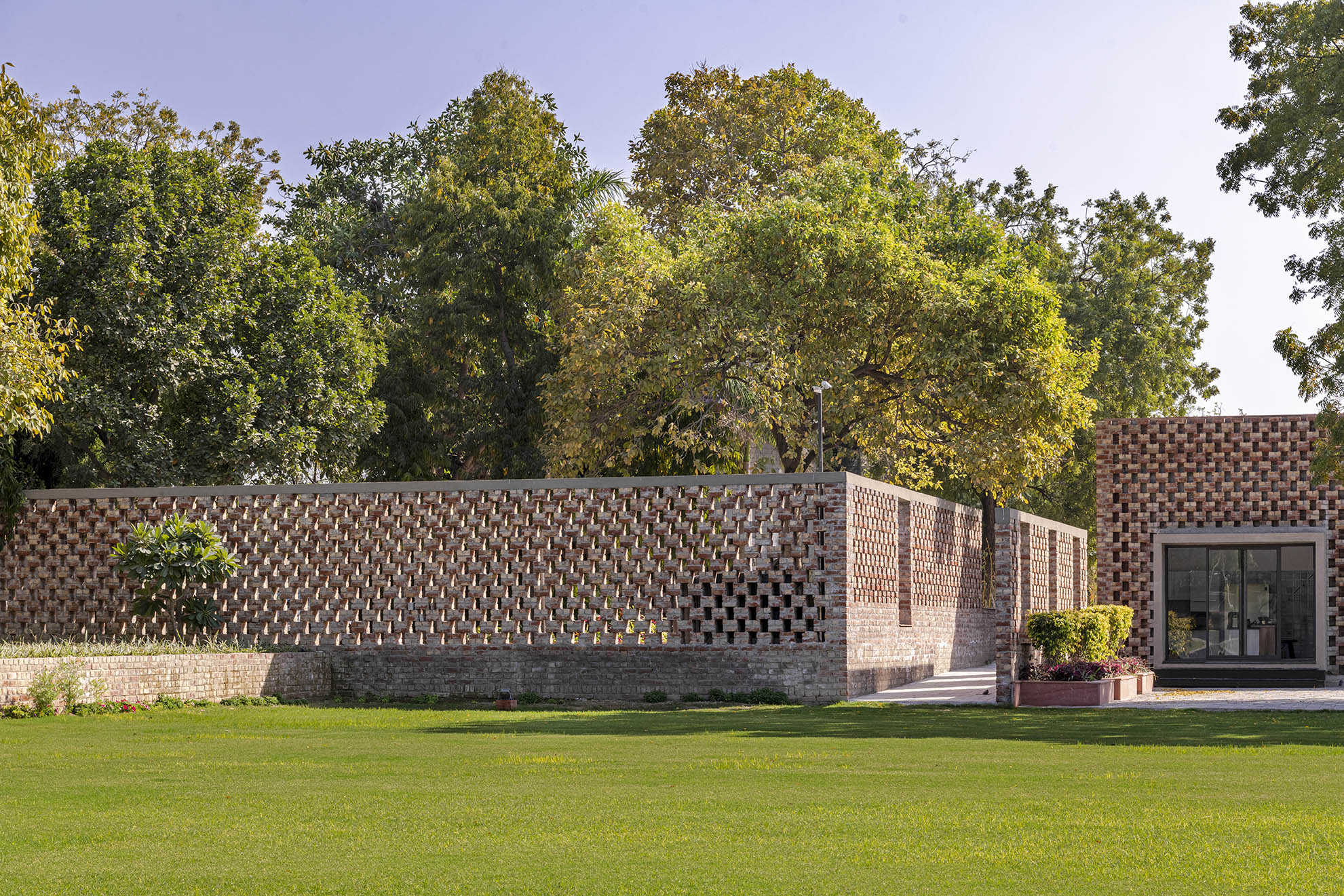 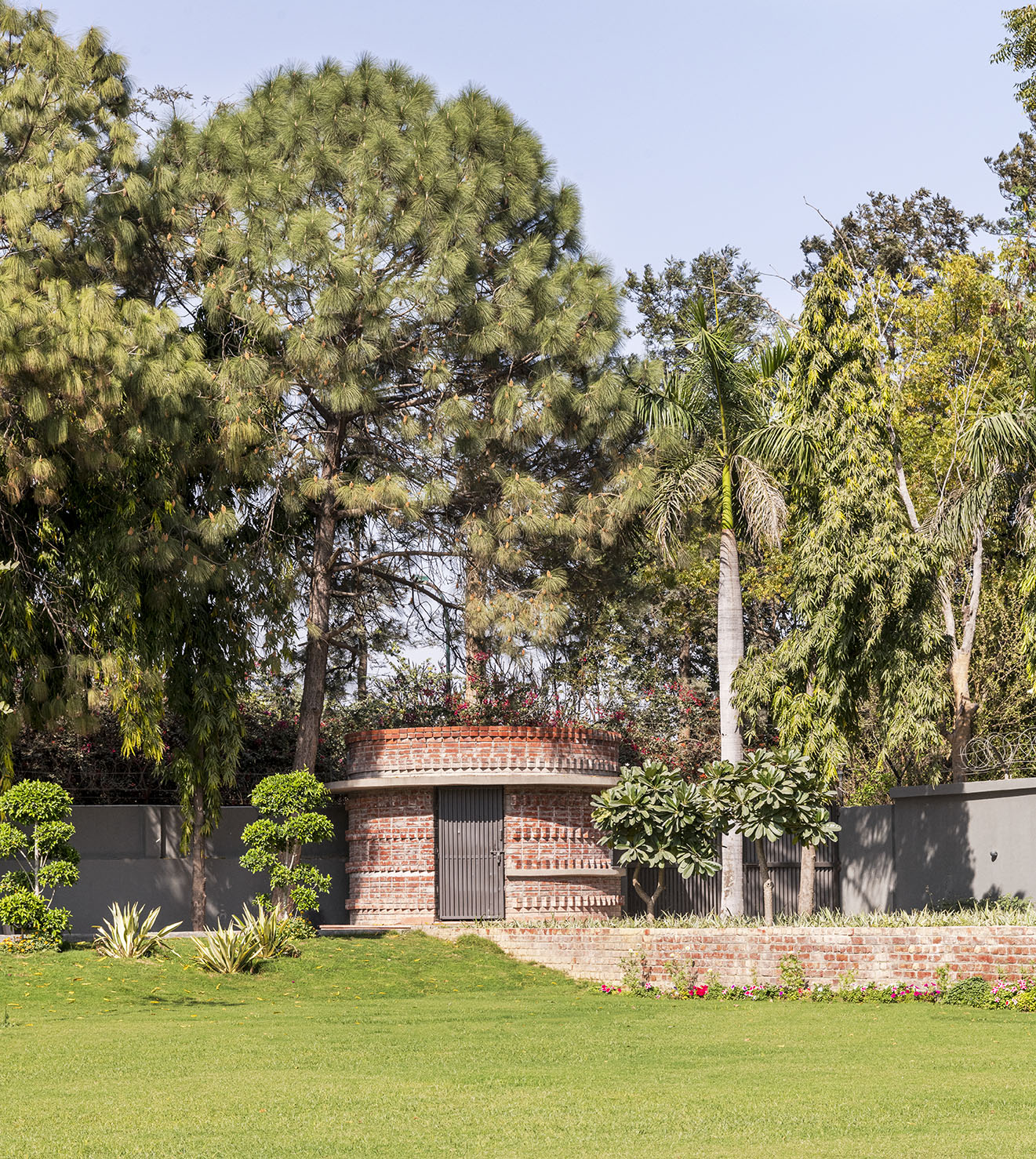 The house is sited towards the southern end of a 6,780 sq. m. plot in New Delhi. This allowed the building to take advantage of the natural slope of the land, the location of an existing tree and a previously built driveway on its eastern boundary.

The project consists of four structures that define its spatial character (a circular guard room, a cuboidal pump room and two residential blocks). Each structure is made predominantly of brick. Distinct and varied coursing details establish a series of five wall typologies that define the visual character of the project. The houses aesthetic is derived from a hand crafted tectonic that resulted from the relationship between the manipulation of a basic brick module and the sun. A steel trellis connecting the two residential blocks further articulates this relationship.

A series of brick projections that are denser at the bottom and more sparse as they rise are organized in as three equally spaced courses that accentuate the verticality of the buildings and distinguish between the ground plane and the top of the building. The projections follow an additive progression sequence that cast a shadow on the wall. The degree of shade and type of shadow varies on account of both the brickwork and the angle of the sun, collectively they shade the wall and in doing so contribute to the buildings passive cooling strategies. The temporality associated with these shadows along with those cast be the trellis and adjacent building blocks / elements create a pattern on the wall that in response to the position of the sun evolve both over the course of the day and of the year.

A swimming pool is strategically located at the junction of the two residential blocks and the overhead trellis. Through its position it serves to engage the adjoining space through an outdoor centric program / function (swimming), mediate between the built mass and the landscape and serve as a water reservoir for evaporative cooling which is another facet of the buildings passive design strategies. The cuboidal pump room is located on one corner of the pool which along with the circular guardroom serve as an architectural folly within the greater landscape and by virtue of their prominent locations introduce the projects defining elements.

Plants both flowering and evergreen, that are native to the region are planted in the parterres that mediate between the paved driveway and the central lawn. The northern edge of the central lawn ramps upwards to define its edge (with earth used from the excavation of the swimming pool and the buildings foundations) thereby giving it scale and make it visible from the house. Within the house a series of four courtyards allow for a more intimate landscape expression and occupation which along with a clerestory window in the kitchen induces the “stack effect” and allows the hot air to escape from the adjoining interior spaces.

The project engages with the multiple contexts of climate and landscape, materiality and tectonic, sun and shadow, to create a spatial experience that is constantly evolving and engaging. In doing so it draws on the craft and material tradition of the region for its making.