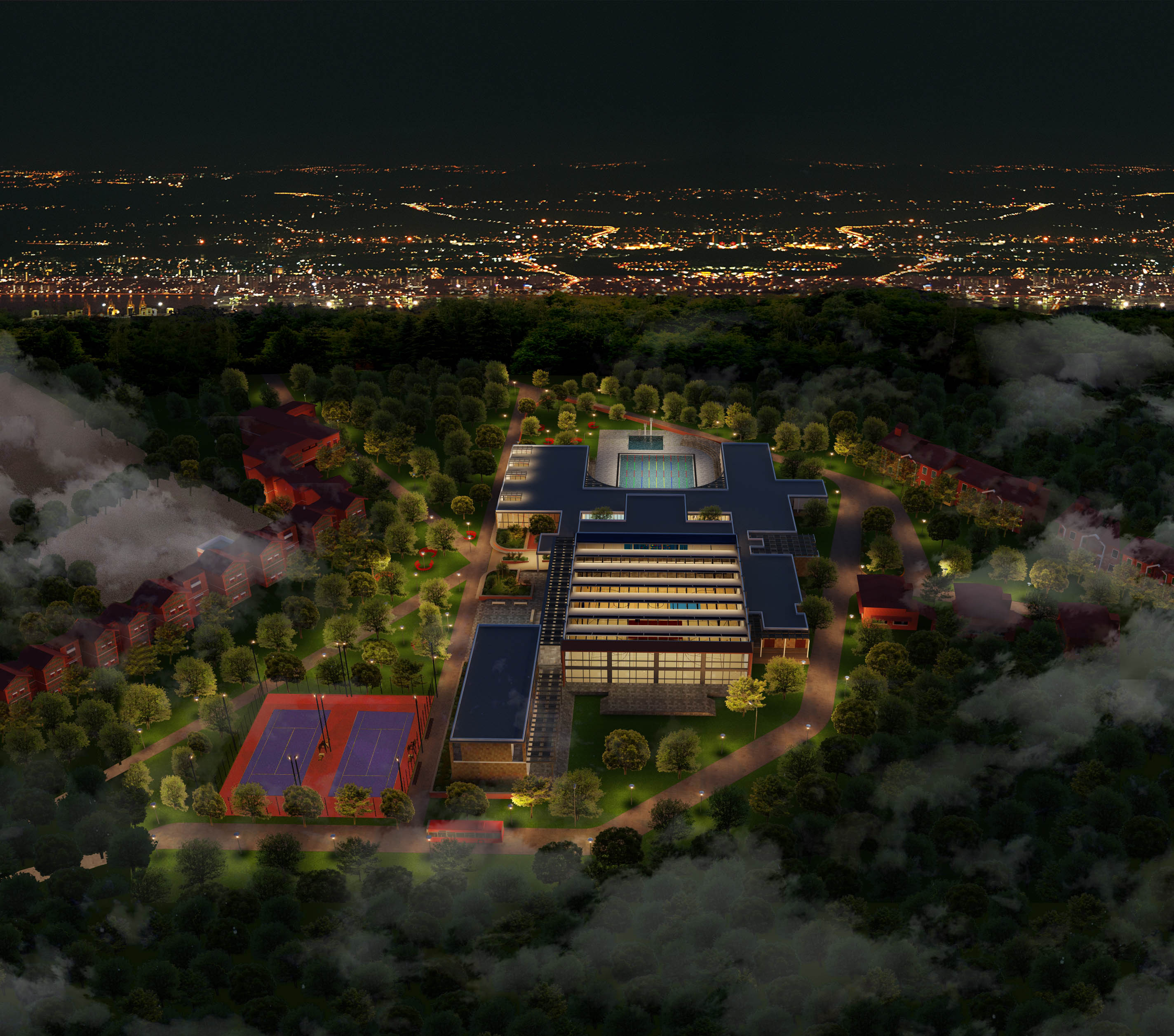 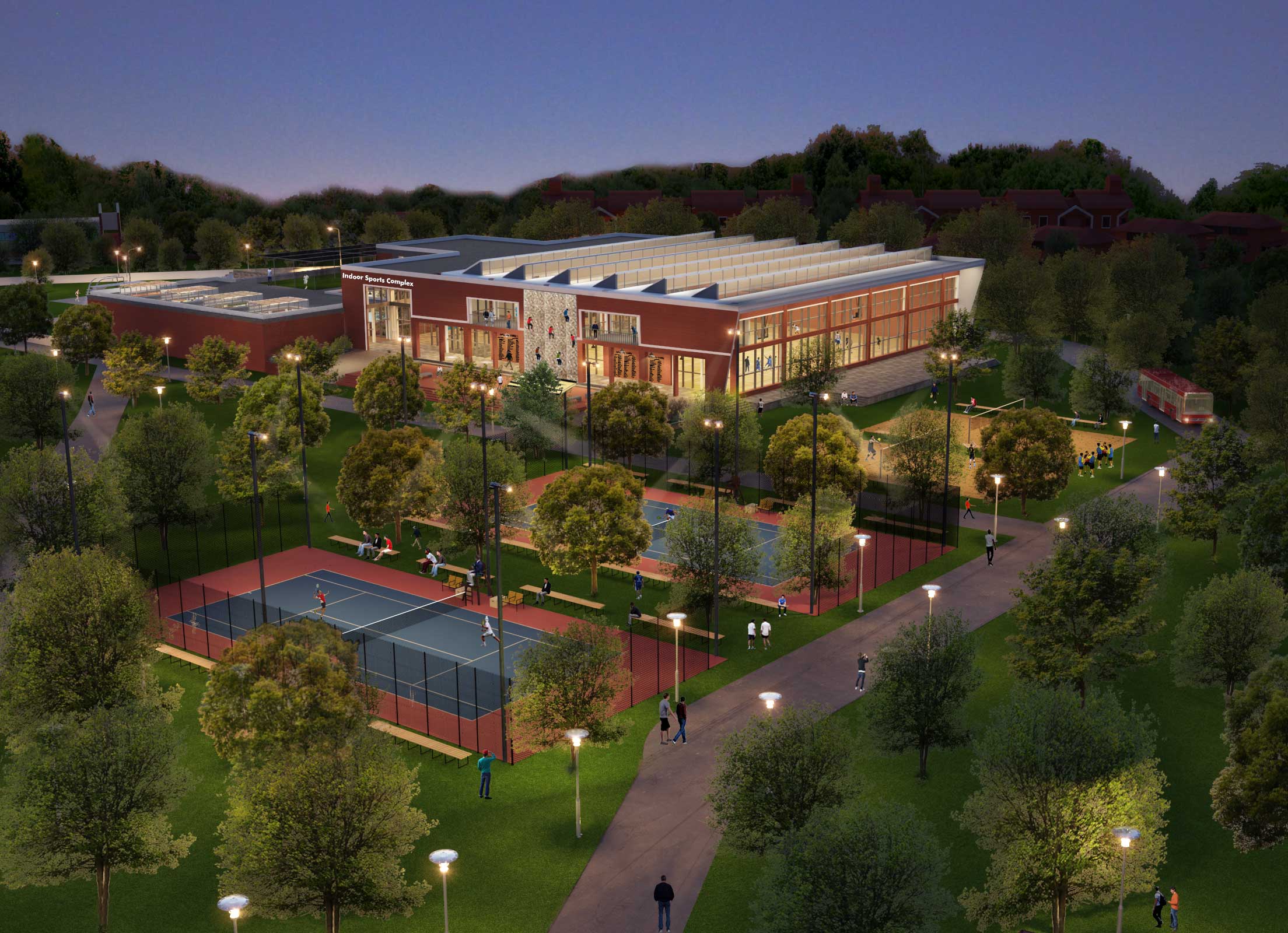 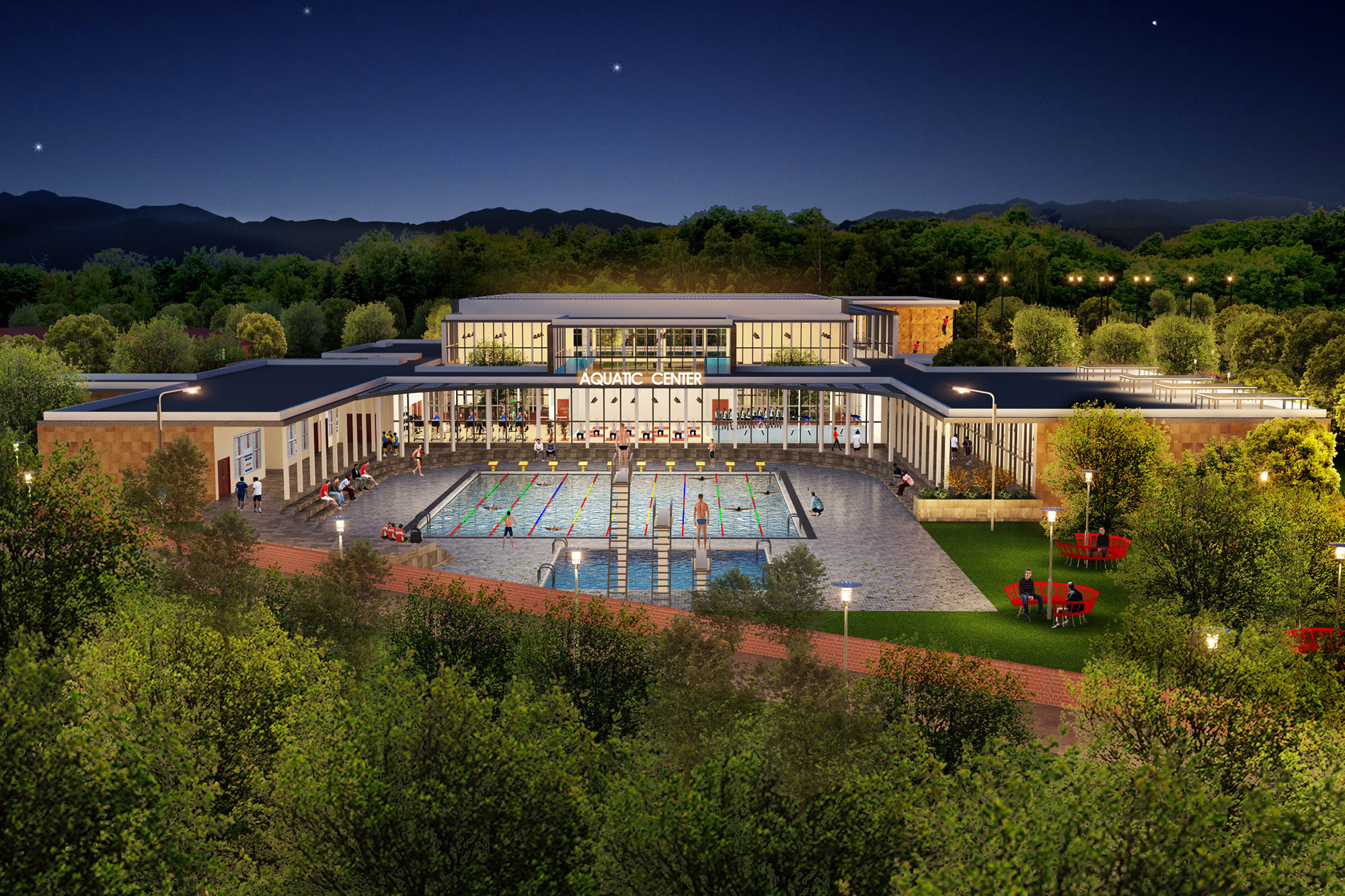 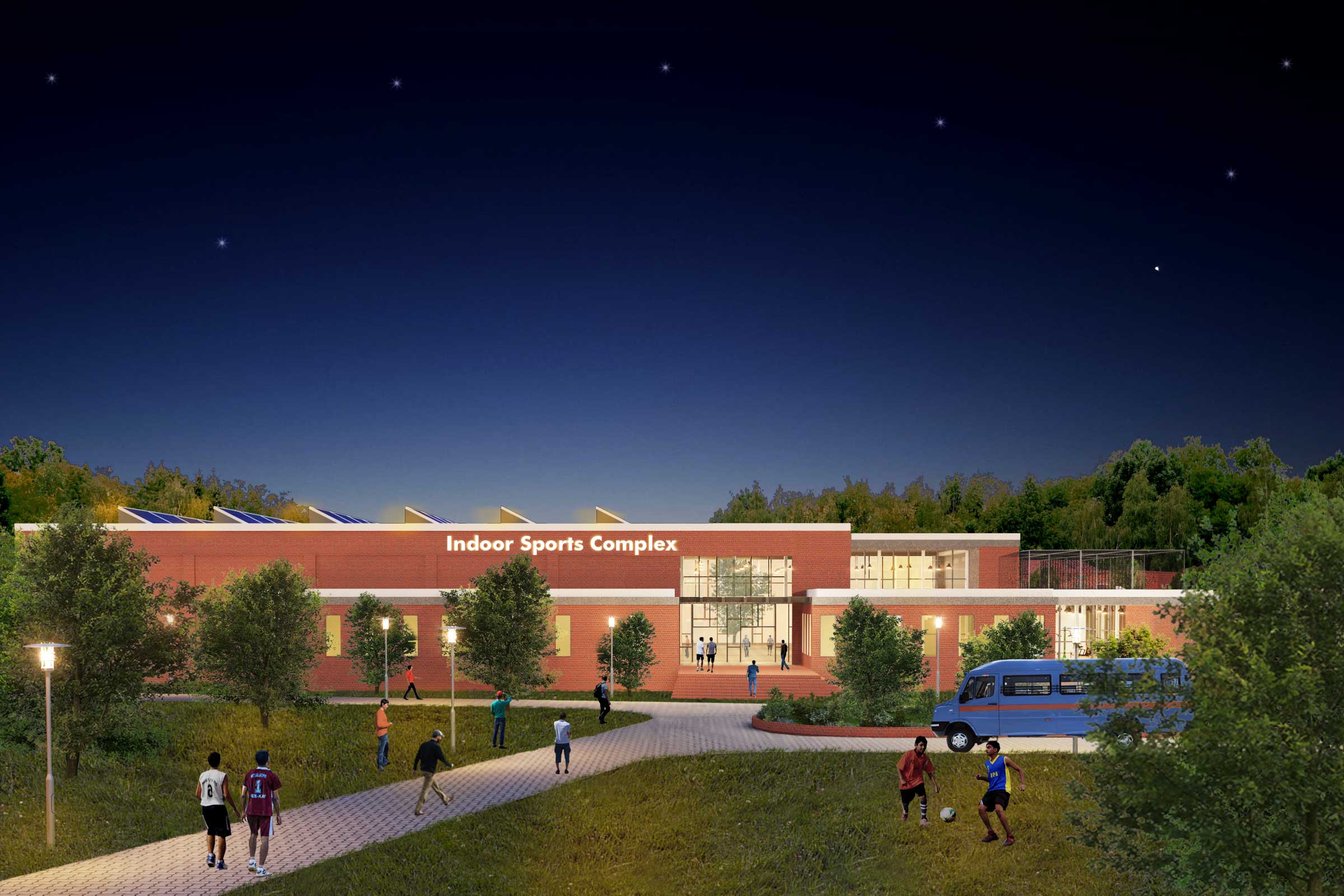 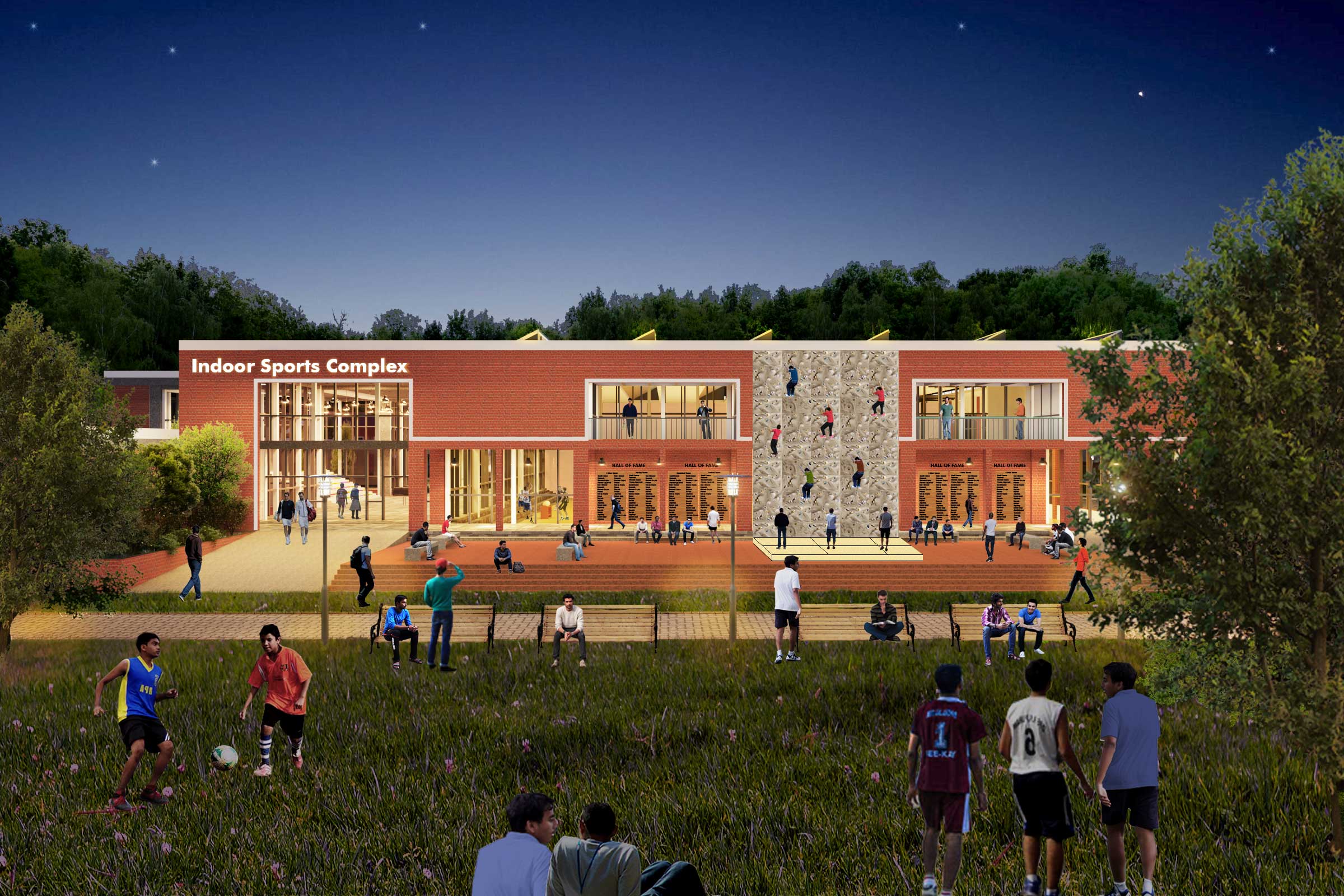 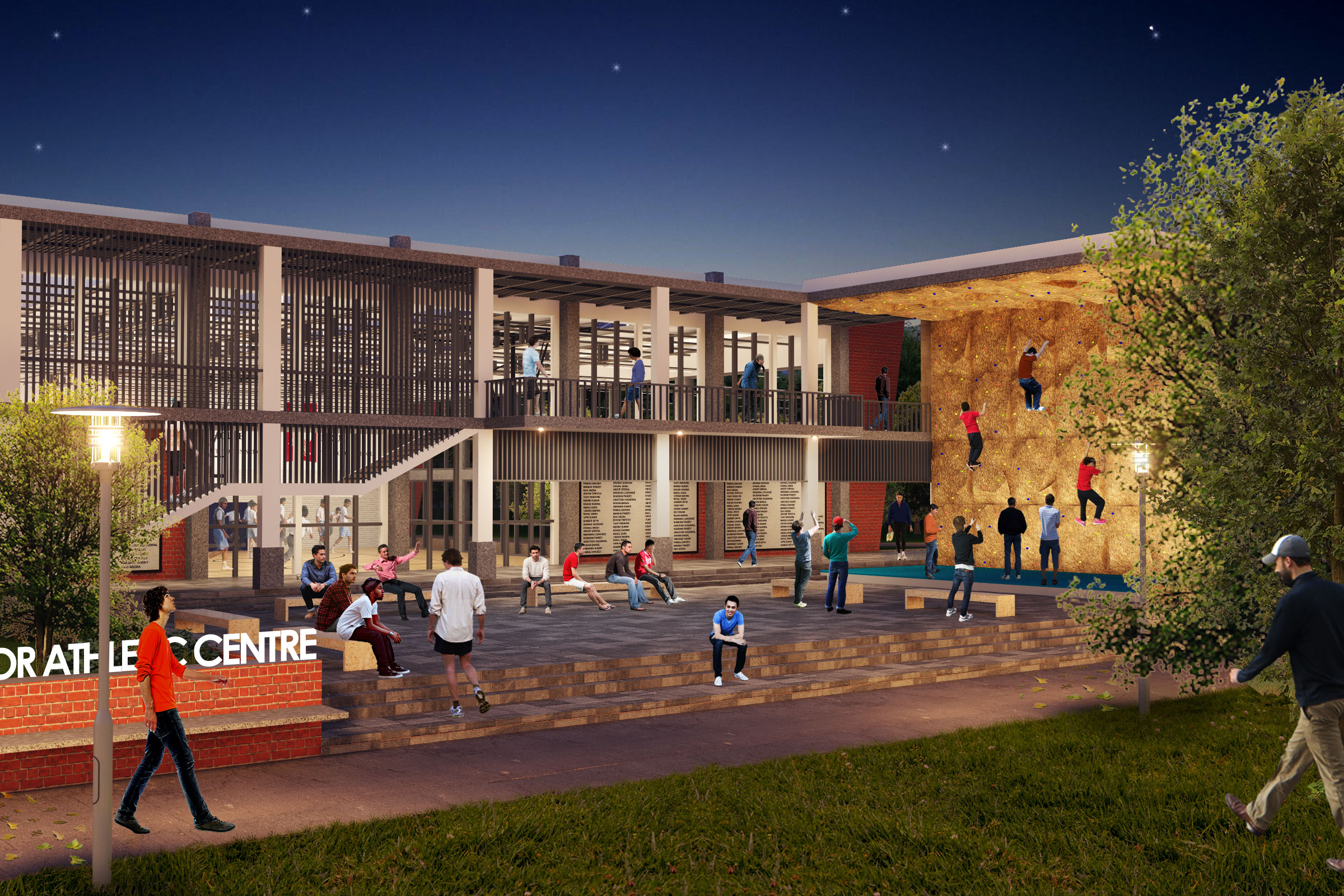 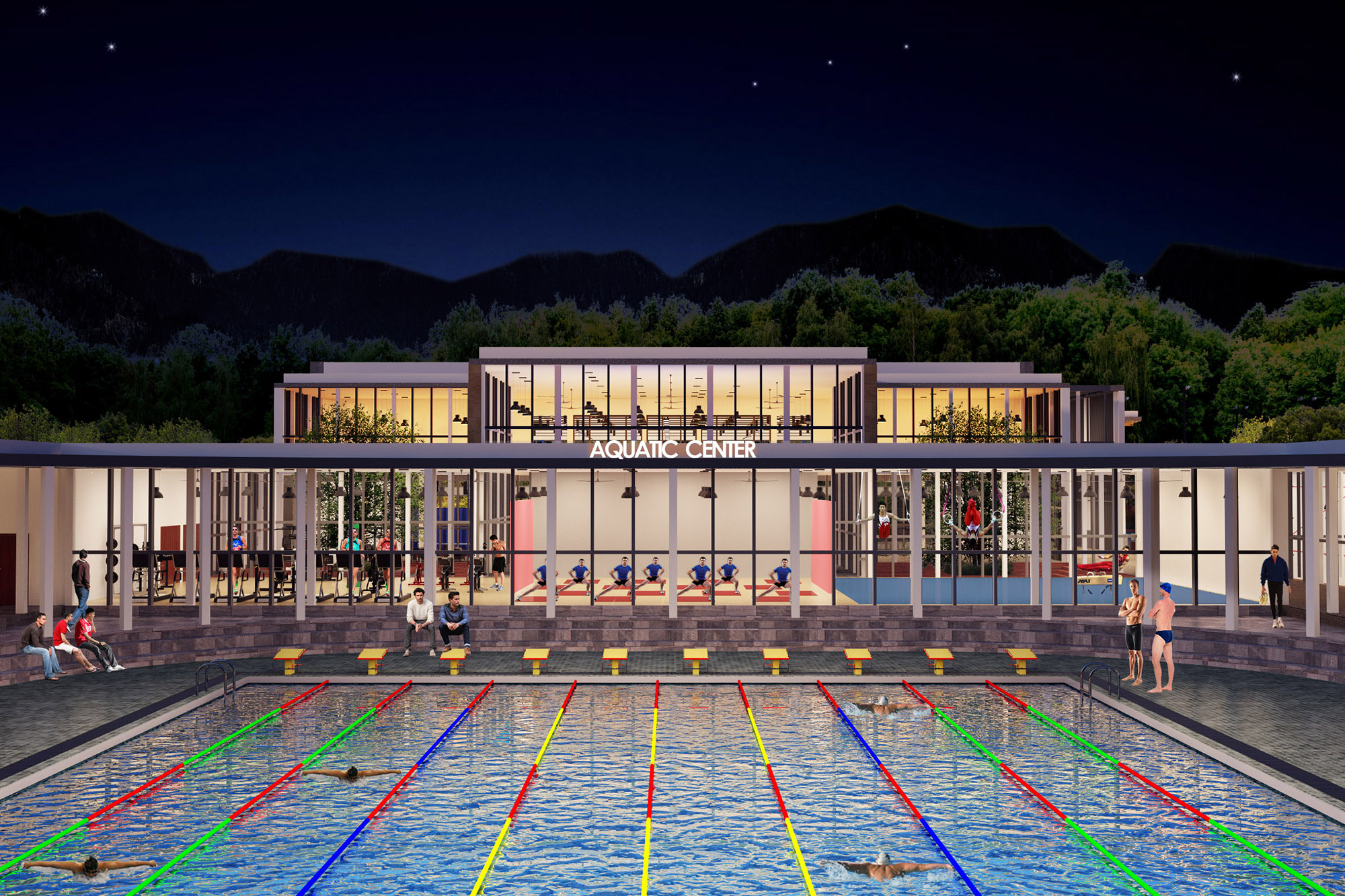 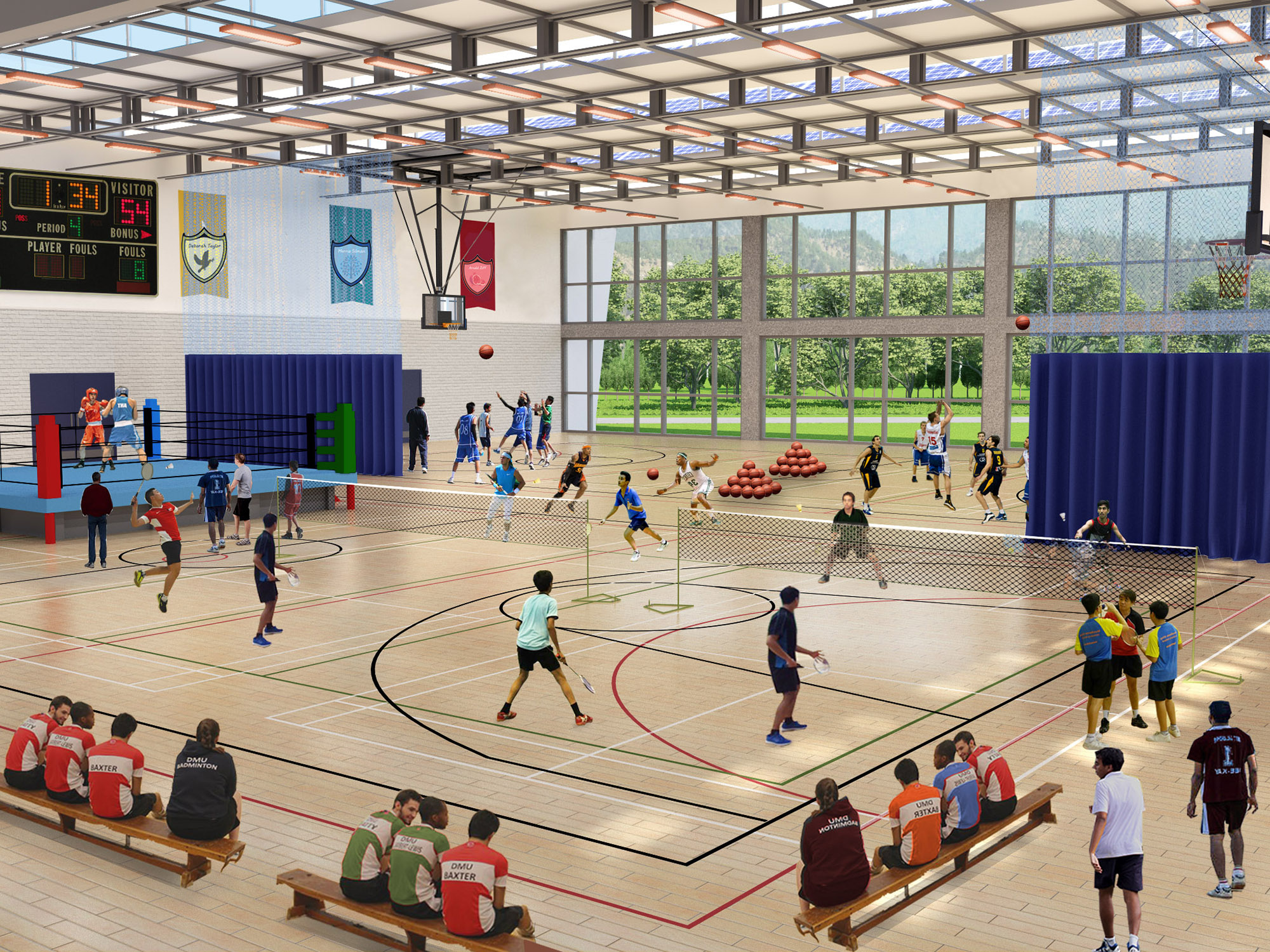 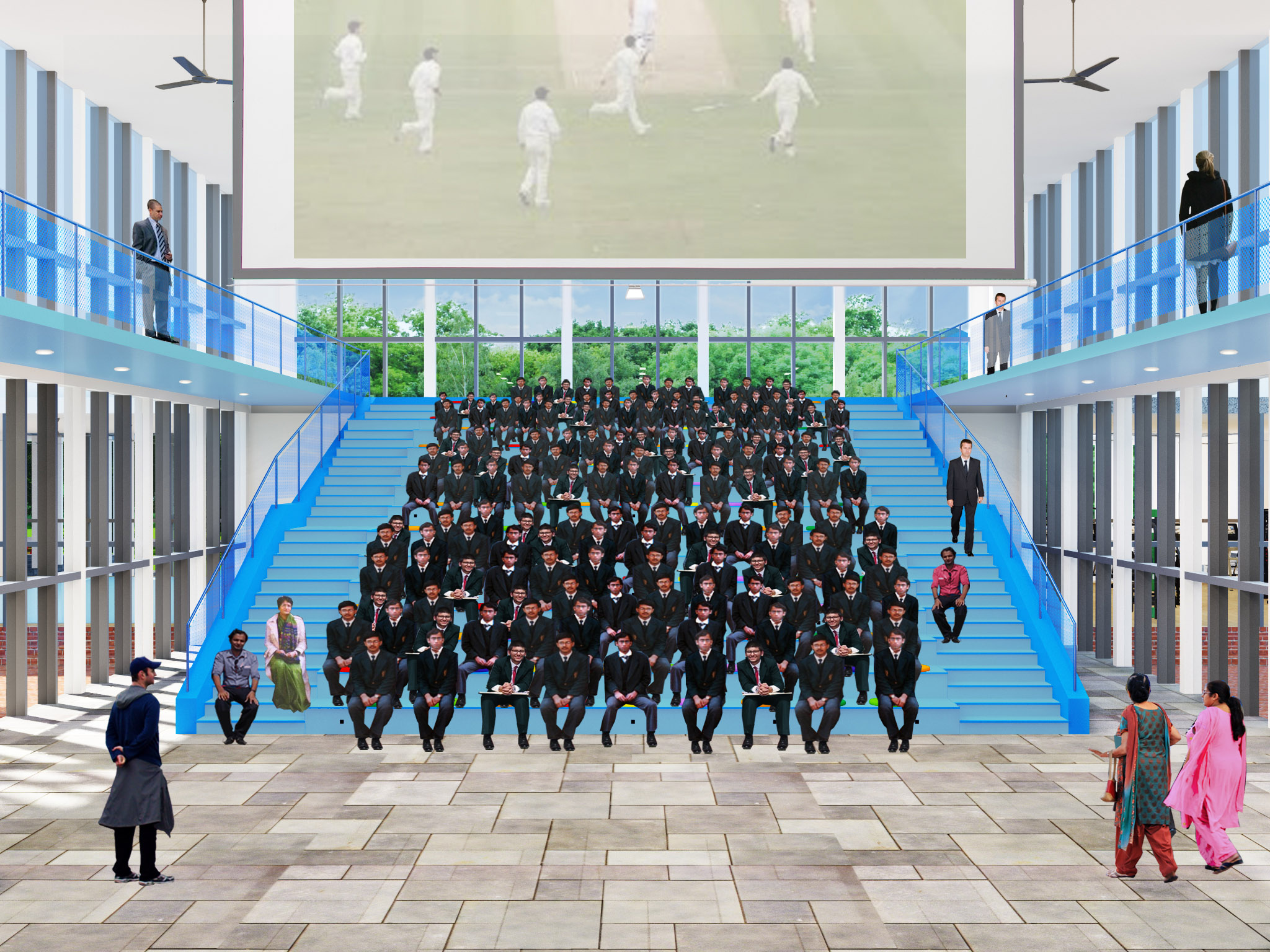 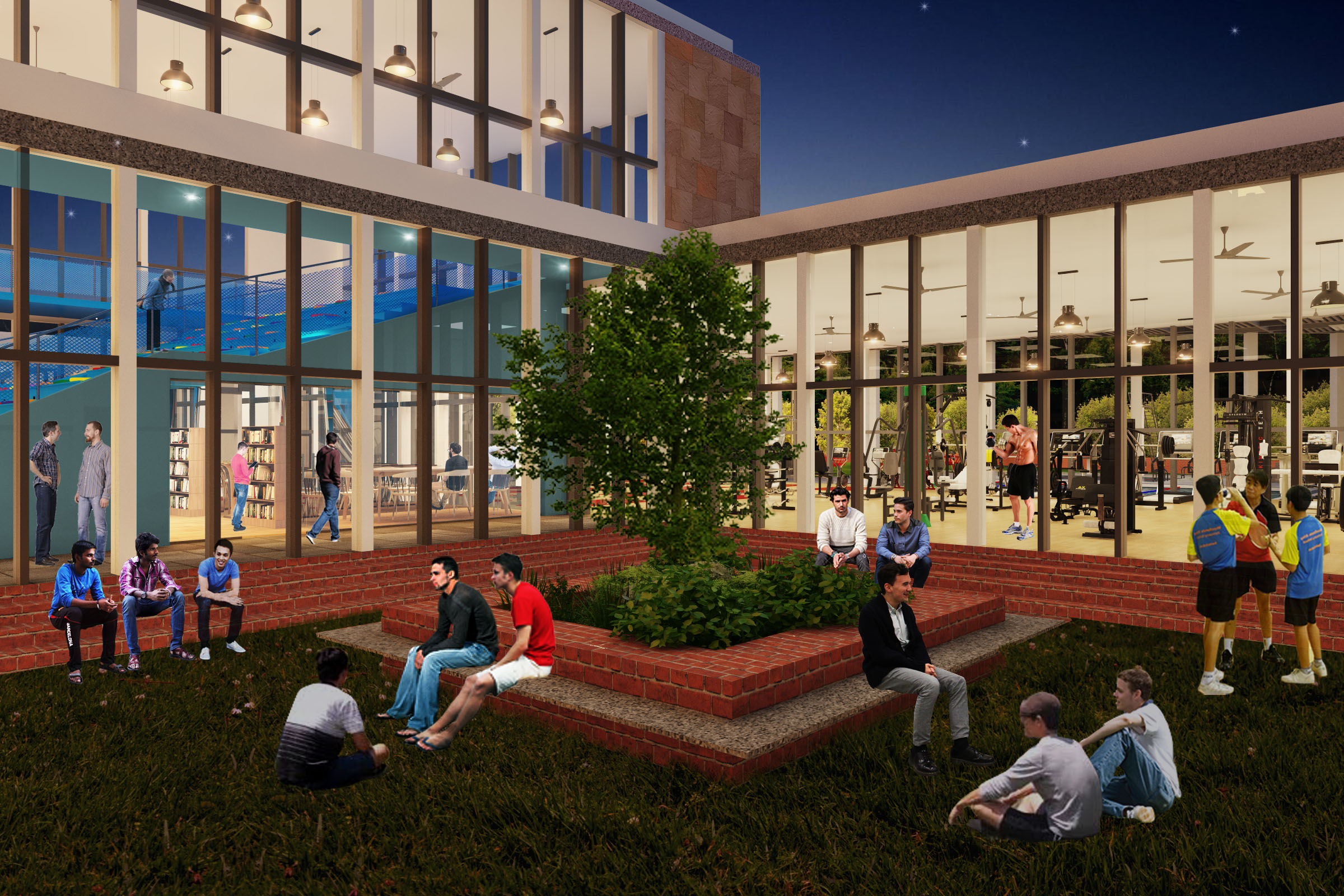 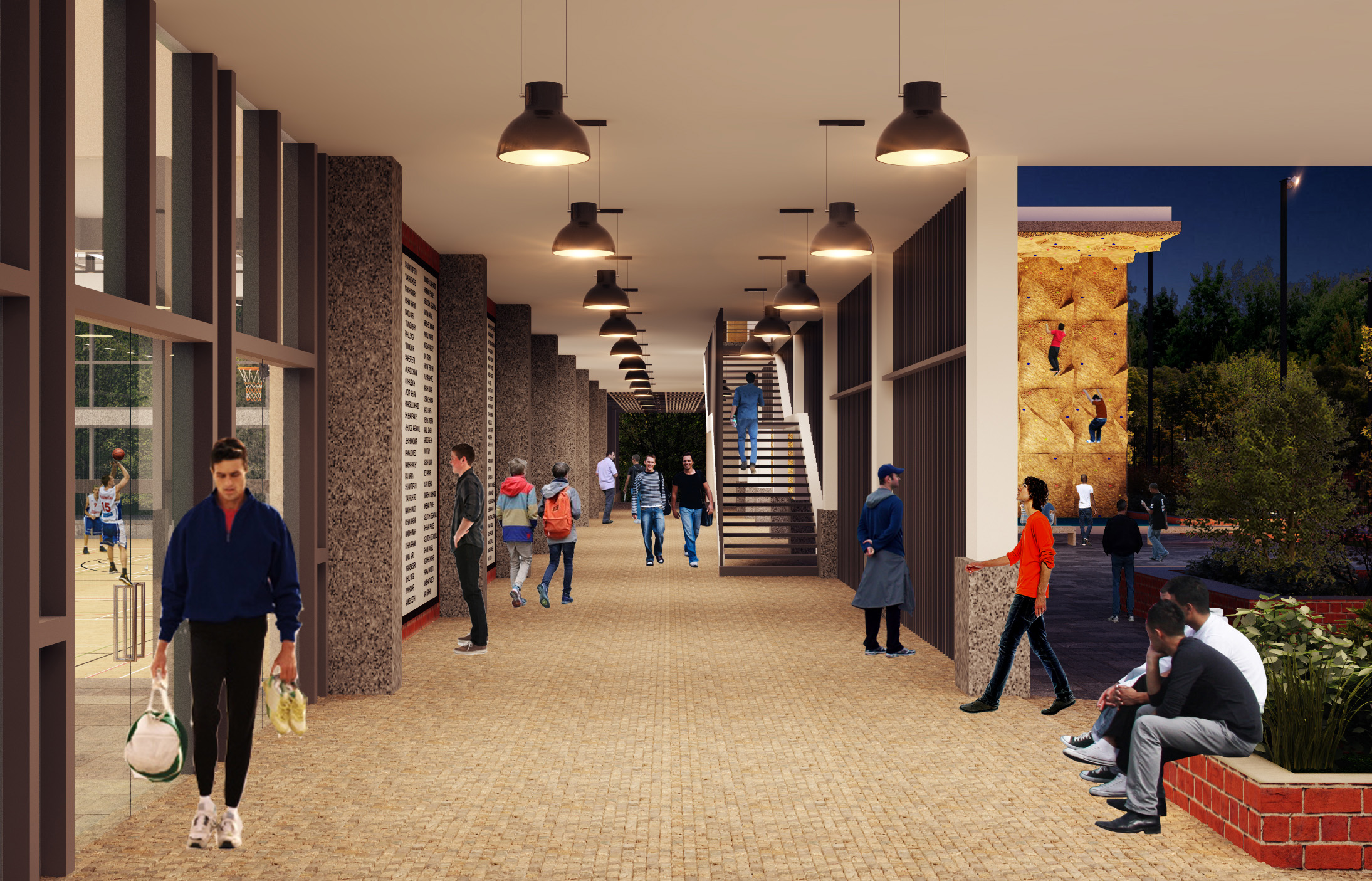 The sports centre was envisioned as both a training facility for athletes as well as a social and community space for them. Towards this end the site planning strategies involved the segregation of vehicular and pedestrian entries, the engagement of the immediate surroundings by introducing both function and a protective landscape around the buildings. For example trees that would shade in summer and shed their leaves in winter. The use of the water from the swimming pool for evaporative cooling, the orientation of the roof to capture solar power and the spatial restructuring of the land around it to enable the recharging of its natural ecologies.

The building comprises of parts that can be used independently or in conjunction with each other. For example the largest volume is with the eight court hall. This ……m x……. column free space can be used either as a naturally lit space or be darkened completely to be used by sophisticated sports lighting solutions. Distinct spaces for other sports like shooting, squash, swimming, gymnastics, weight training, yoga and dance have been provided. Additionally, supplementary spaces like physiotherapy rooms, video studios, a library, a lounge and café along with dormitories for visiting teams have been planned for.

Organized around two internal landscaped court, that bring natural light deep into the building and enable the creation of a microclimate through which the building is cooled, they also serve as the catalyst for both community development and social engagement by providing a programmatic impetus for such activities to take place. A central double height foyer that interconnects both the vehicular and pedestrian entrances also serves in rotation as spaces for table tennis, video projections and in conjunction with the eight court hall a large assembly space.

Exposed masonry and limestone, both materials that have a strong local presence are the are extensively used in the buildings construction. The scale and complexity of the project necessitated a zoning that would allow parts of it to be built either independently of each other or simultaneously, a strategy that subsequently created possibilities in the use of the building i.e. the building could be use in parts or in whole depending on the individual situation.